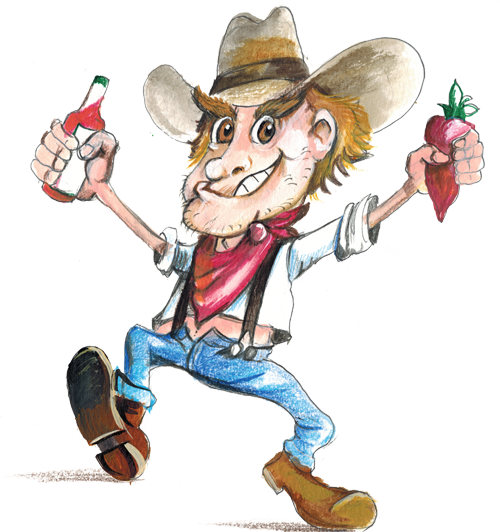 WEBSITE UNDER CONSTRUCTION: PLEASE VISIT ETSY FOR ORDERING UNTIL THE STORE IS READY HERE!

Until then enjoy reading about TN Bob and his spicy friends here!

The founder of El Rancho Del Fuego is Tennessee Bob. Straight out of the Appalachian mountains, this man lends to humble, down to earth simple folk. Campfires blaze while songs are sung, folks drink and dance around the fire. That is the mind of this homegrown Hillbilly. He has long since been removed from the country, but the country is still in the boy. Age has not affected his soul although his body has taken much beating. He was always a fairly tall boy and skinny as a rail, but in his middle age, his body has scars, his face looks a bit sagging from the stress of the modern world and he sports a small but prominent spare tire for a belly, not quite a keg unless his belly is full of booze and food! He always wears a crazy boyish smile unless stressed then he lends to the dark side more like Jim Grim. There is a suttle sag in that boyish smile that he has been fighting to keep on his face through it all.

He had married a beautiful Ecuadorian woman late in life, they had an only son together and just went things were going well for them, the good ole U-S-of-A went south…… and they did as well, literally! The  plan B that he had dreamed of; buying a piece of property in Ecuador and creating a retreat came true at the last minute.

Bob had always dreamed of this place, a magical place nestled somewhere between the Andes mountains and the Amazon jungle. So once he and his family retreated to their Rancho Del Fuego, it wasn’t long before the world’s most spicy characters found it, a place where no one of stature would even think to retreat.

Tennessee Bob tells his stories and they are worth having a nice long sit by the fire to enjoy in El Rancho Del Fuego! 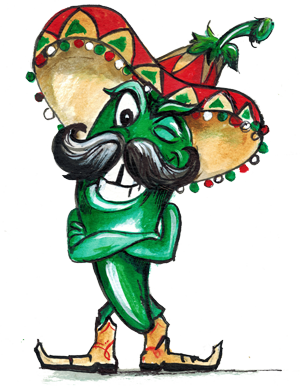 Jack was the first of the world’s refugees to find his way to the ranch. Being that he is most renown of all God’s pepper people, he is the main character.Jack comes straight from Mexico City. What led him to this place high in the Andes mountains was rumor of a retreat where he could escape from the harsh world and live in peace. He suffered much tragedy that made him finally run away as a Mexican refugee- he lost his wife and daughter to an Earthquake. Now Jack has some spice but he is middle of the road in flavor and demeanor. He is straight shooter. What you see is what you get. Being the first and the most civil of all the ones to come, he is Tennessee Bob’s right hand man. Jack is short and stocky with a mustache and a sombrero. He is always smiling but only with his eyes, otherwise he is a quiet sort unless really antagonized then his worst side comes out and knives start flying. Remember, these characters are all renegades looking for some peace from their insane world (much like ours today). They are not to be messed with. Jack’s favorite saying is, “I told you five times twice already, how many times I have to told you man”. 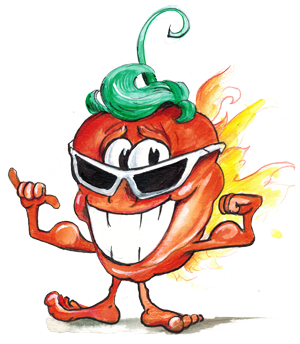 Happy’s real name is Javier and he is HOT (at least that’s what the girls say)! Having been born in Tijuana, he moved to California after “high” school and became a surfer and did well working at surf hops. He auditioned for Baywatch but didn’t make the cut because his eyes were always a bit red as Happy is just that- a California surfer dude and ultimate stoner.   When he was about 22 he met this girl named Josie ( A beautiful Desert Rose) who was just his type and they fell in love. Happy couldn’t be any happier. Then one day he got the news he was going to be a father. The girls Dad hated him and threated to kill Happy, so they eloped and nine months later they had Happy Jr., a real cutie pie! 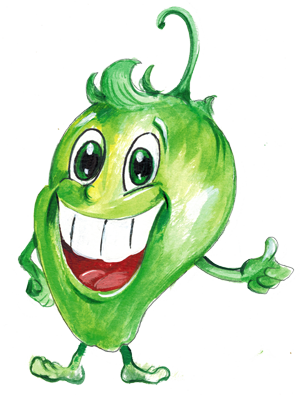 Once Josie and Happy had their beautiful young boy Happy Junior and the father threatened Happy’s life, they all moved to Colorado and settled down. She became a Ski instructor and Happy maintained the Ski Resort. Everything was bliss until one day his Josey had an accident. She was giving skiing lessons when an avalanche took her away from the Happy Boys. Heartbroken, Happy and son became nomads and backpacked all over the world, finally ending up here a few years later at El Rancho Del Fuego, near Cotapaxi Ecuador. This is their new home and they add much spice to the ranch. The minions (sweet bells) love them both but Happy Jr. Is their boy! Happy habanero being traumatized for life with the loss of his one true love is forever a player. 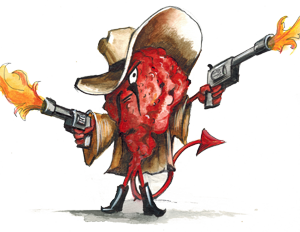 Ole Jim is not one to reckon with. He is the baddest of all the Ranchero’s He came to us through the Wild Wild West. He is a gambler, Cowboy and a snake. When Jim gives you that look and crooked smile (somewhat like The Grinch) and the end of his lips curl up high, you feel like you just lost your soul and he has casted you to hellfire. He is just an Hombre who has had his share of being kicked around and the world made this hybrid of a man, if he is a man at all. He came here looking for some salvation when he realized the world made him this way, it isn’t his fault. He has class, taste and integrity. If it is hot, by God it is hot! He is  is the guardian of El Rancho Del Fuego and everyone from miles around knows not to mess with him or our Ranch! He always defending the place from intruders and is always ready to come out with guns blazing. 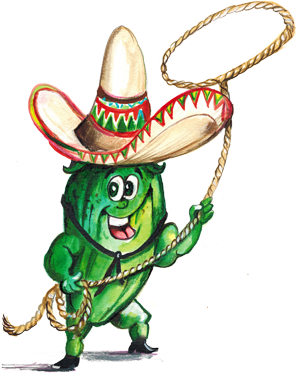 Pablo comes from Puebla Mexico. His nickname is Ancho ( Ancho chile). He is a big strong farmer’s son, and his heart is warm like that of a young spirited boy. He has a fondness for cattle rustling, a skill his father taught him. He can lasso a steer five times his size. He actually looks more like a teenager with a few zits even though he has many scars and age lines from the hot sun. He is as dedicated and loyal as they come, defending the ones he loves with his life. He wouldn’t intentionally hurt a fly but somehow has become Jim Grim’s right hand man-The Adjuster. Pablo knows right from wrong but he is as obedient and would do anything Jim says even though violence is not hios nature. Don’t make him through his weight around though. When he does get mad, which is rare, he can rip a twenty foot tree out of the ground and snap it over his knee. He is harmless in demeanor but can carry his weight. He came here after accidentally breaking a man’s neck trying to defend his best friend in a bar fight. Damn the Tequila!